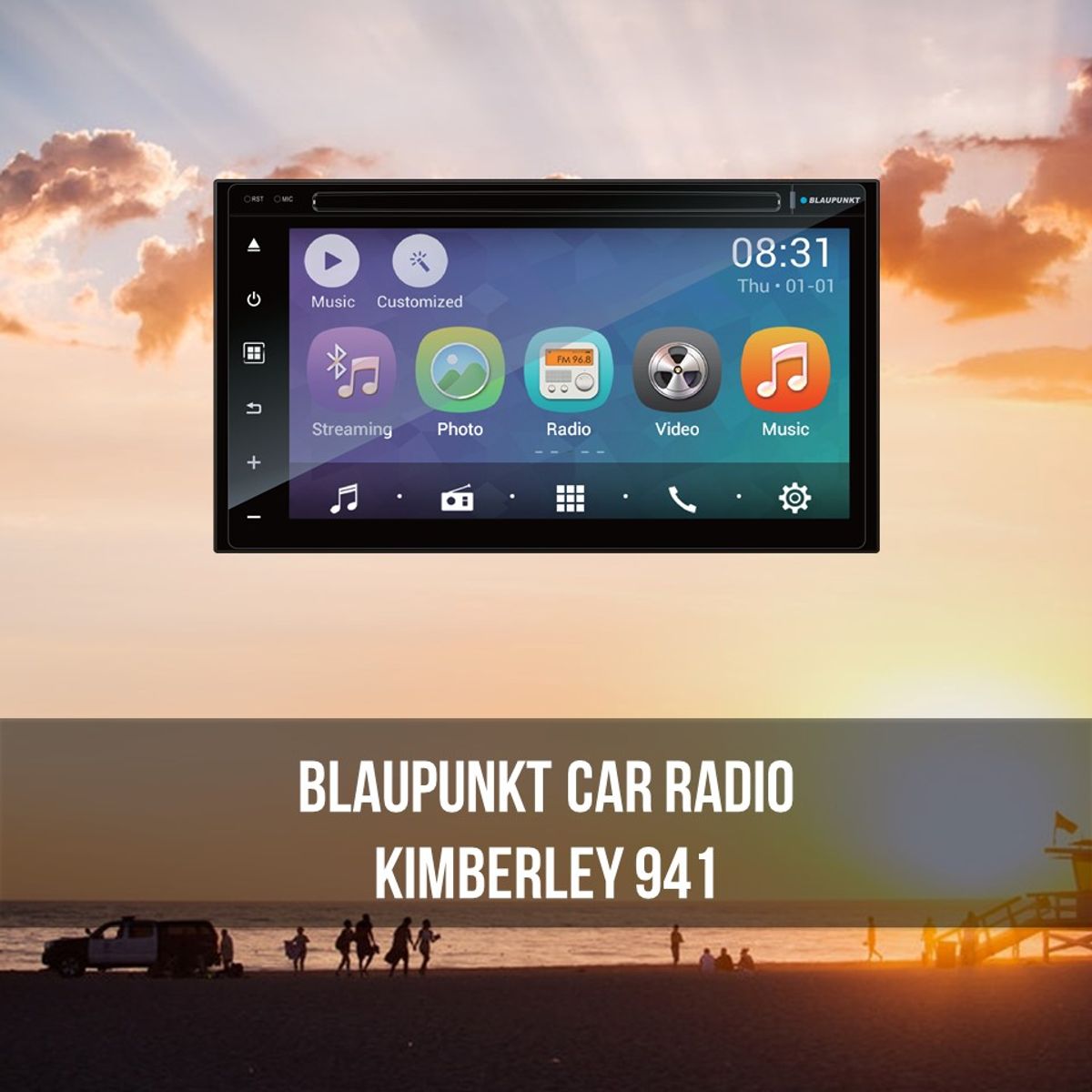 Blaupunkt Multimedia Navigation Kimberly 941 is a car radio with capacitive touch screen panel which comprises of many enthralling built-in features that gives the user a sense of control and safety while on the road. Other than Phonelink and Bluetooth connection, Kimberly 941 car radio has Navigation-ready system for users to find routes to their destination. This car radio even supports internet access and the user can customize the LCD display theme according to the user mood.

Kimberly 941 is the latest car radio in the market of mobile entertainment featuring a 6.75” wide screen display. The car radio’s screen is anti-reflective, encouraging better view and the brightness of the LCD screen is adjustable according to the user’s preference.

Kimberly 941 car radio home screen can fit up to six apps by folder on the screen, just like a mobile phone, such as music, photo, video, radio, navigation, and phone. It can vary according to the user’s need and preference.

Kimberly 941 does not come with fixed background setting. The car radio let users to change the display theme, according to their tastes with the various built-in theme options. Not only that, users can change the radio’s display wallpaper with motionless pictures or imply featured motion options, which are the live wallpapers that are seem to be available in android mobiles. This interesting feature can make the user’s radio more appealing than it already is. For those desiring to see uploaded picture as display home screen, Kimberly 941 can make it happen.

Kimberly 941 car radio had pre-installed apps to help users to feel less complex about using the radio and to lessen the requirement to use their mobiles while driving the car. Some of the best yet helpful apps that the car radio have are built-in internet browser, navigation app, social media apps such as Facebook and twitter, Accuweather, calculator, calendar and file explorer. The user can even receive and send out emails with the help of Kimberly 941 car radio.

While driving, mobile devices are the one gadgets that can contribute to the Wi-Fi and internet access but Kimberly 941 car radio allows users to get the access via Android USB tethering and Wi-Fi hotspots with wireless configuration. The user can stream online and listen to music on the go without downloading in their mobile devices. This limits the usage of phones when driving and optimizes the road safety.

Navigation is one of the key features present in Kimberly 941 as the car radio is able to help the user to get to the right destination without getting lost. Software will be provided for the user when Kimberly 941 is purchased. The user can install on their own or can get help in updating the navigation in the car radio.

Displaying screen of the mobile device onto the car radio’s screen can be done via a simple USB cable that is being interconnected with the phone and the radio. With the Phonelink connection, Kimberly 941 allows the user to control the radio through the mobile and vice versa. It is a two-way mirroring for android and one-way mirroring for iPhones where the radio can only be controlled from the phone and not vice versa.

Pairing the user’s mobile to the radio via Bluetooth allows the user to attend, make and answer calls in terms of not using the phone physically but via hands-free. This connection with Kimberly 941 allows the user to keep attending the calls while driving. The radio can utilize the phone’s function in terms of auto connect or auto answer the call as well as managing second call by call waiting of call hold for users. There is built-in microphone and radio speaker aiding this function.

Users can drive and control the radio at the same time with the help of Steering Wheel Control that is a built-in feature of the car. To access this option, user must connect the required cable linking the steering wheel and the car radio in order to gain full access and experience easy driving in the car. This feature also helps in answering, receiving and making calls. The user can fully keep an eye on the road and talk without neglecting road safety.

PRK SW cable is connected to the hand brake switch where the video display of the monitor will be controlled by status, system setup and input video sources. When the car is moving forward, and a video source is being played, the screen of the radio will display a warning disclaimer and a blank screen. The warning screen will prevent the user from watching the images while driving.

Reversing and Parking can be an easy task with BC OE1, the reverse and frontal camera can be installed with Kimberley 941 as an optional accessory. This versatile Multiview camera can function as both front and reverse camera whereby its 140° vertical view allows the user to notice vehicle from far ahead moving towards the user’s car, and the camera’s 180° horizontal wide view assist in spotting pedestrians and cars strolling close to the user’s car when reversing or parking.